Nazi Gold Caps? You've Got to Be Kidding 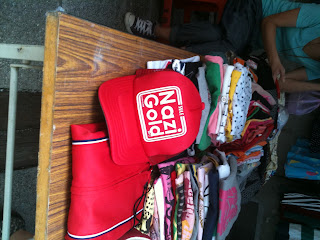 I took this shot at the Huashan Culture Center (華山創意文化園區) yesterday in Taipei. I have been told before in making such posts I am a.) a boring individual b.) humorless c) both. I don't see the humor in the pic above. Nazi Gold? Is it the name of a new band? Nazi Gold makes me think of Jewish people and the Holocaust. Not that I'm against thinking about the Holocaust. If you go to Israel, pretty much the first thing anyone asks you is if you've been to the Holocaust Museum. In putting Nazi Gold on baseball caps, where there is no context, something strange is going on as the message is probably meant for the head of some swaggering moron who has no idea about what is on his head. Selling these "Nazi Gold" caps is screwed up for many reasons. I could do a reason a day for the next month.

I told the vendor the caps made me uncomfortable. She said sorry and put them away. Ten minutes later this one (above pic) was out again, so I took a picture. I was thinking it would be better for when I figured out who to complain to. To my surprise, the vendor started to follow me and even became aggressive. I told her the caps would undoubtedly make people think of what happened during World War II. At first, she apologized. She said she had no idea. She also said that a foreigner sold her the caps; therefore, she believed they had to be okay. When I shrugged and continued on my way, she tried to grab my phone. Then she said she'd have security detain me. For what, I don't know. I shrugged again.

When I got to the sidewalk, the vendor became more emphatic, stepping right in front of me to block my way. Then she started jabbing me in the chest, calling me a troublemaker and lousy father. "Are you Jewish?" she angrily asked. Ha! Boom! So she did understand the caps could make people wince and the reason too. Actually, I heard her friend say the first time I complained

"Foreigners always complain about those caps."

My wife and I were wondering why the vendor would lose her cool and go to such lengths over a photograph. My wife thinks that she doesn't really understand what she's doing. I, for reasons already given, am not buying that. I think the vendor has been taking flak for selling the hats -- more than she supposes she deserves -- and has finally had enough. That could be the reason she exploded yesterday. But that also gets me thinking about why she would endure. The hats must sell well enough to make it seem worthwhile.

I wonder who I should complain to about this? Huashan Culture Park? The city?
at September 03, 2012

My wife and I were wondering why the vendor would lose her cool and go to such lengths over a photograph.

She was probably afraid, that you'll publish the photo online and expose her. Boy was she wrong: She completely overreacted.

If she's worried about people exposing her, the answer is quite simple. Stop doing something that is worthy of being exposed.

I think this has to be her big seller; otherwise, how could it be worth it?

Perhaps you're right about the bestseller, but we will never know, as we don't have her sales record.

But you can't expect too much logic from someone who's doing something like this. I remember few years ago some German tourists discovered a supermarket in Italy, that sells wine with Hitler images (you can check the link here). When the German media came to take photos and report, the reaction was similar to the obasan's in your story. So I was a bit surprised, that you and your wife wondered about why she lost the cool. I thought this is the universal reaction of crooks, when they get challenged and exposed.

Is it against law to sell caps with this kind of statements in Taiwan today? Where is the freedom of speech in the so called democratic Taiwan?
She is a small business owner just making her living. I am sure she has right not allowing any body to take picture of her property.
You should ask her permission before taking pictures.

"Is it against law to sell caps with this kind of statements in Taiwan today?"

There is a provision in the Constitution for lodging complaints. But I never said it was against the law to sell caps of this kind in my post.

"Where is the freedom of speech in the so called democratic Taiwan?"

Absolutely. And get ready to be challenged for expressing something idiotic. Others are entitled to freedom of speech as well, and that definitely covers challenging stupid shit.

"You should ask her permission before taking pictures."

Why? We take pictures all day long of things we don't own. Buildings. Buses. Gardens. I once took a picture of Taipei 101. I took this picture so that I would be able to more clearly express myself about something that is hateful. It's probably not necessary for me to be sensitive to her feelings; she's selling hats with "Nazi Gold" on them.

Isn't "Nazi gold", Raubgold, a specific reference to the gold stolen by the Nazis and stashed somewhere - yet to be recovered?

I think of the gold fillings when I hear that expression. I think there will be negative associations coming in from all over.

I had thought that by that time Amalgam filings were more common?

Nazi gold would seem to more likely refer to gold (and treasures of all kinds) stolen from their murdered victims.

Depending on context these hats may have meant in an inoffensive manner.

There isn't any context though, as mentioned in the post. I doubt the woman was trying to be offensive or meant anything along those lines.

She also said that she'd had a hard month. Due to the typhoon, she's lost several days. I thought about simply buying all the caps myself and throwing them away. But that would

a.) have given her a profit for them still
b.) encouraged the production of more

"Nazi" stuff is able to be seen here and there around Taipei. A few days ago, in getting off a public bus, I noticed that the driver was displaying a Nazi flag on his dashboard behind where you scan your card to get off. I certainly would have snapped a picture but it was late and I didn't notice it until I was getting off.

I have also seen two instances of Nazi flags behind license plates - you know, the flags that are supposed to show you have an imported car. It's fairly doubtful that Germany was exporting that many vehicles to Taiwan pre-1945 so the driver must think they look good.

You also can see Nazi collectable catalogs - I have seen teenagers looking through them and imagine they came from local bookstores.

In my opinion, snapping a picture and putting it online to make people look like the idiots they are for displaying such garbage is a good place to start. Perhaps next time you could get a picture of the vendor along with the hats and she could inspire some kind of Internet meme as crazy Taiwanese Nazi lady.

Why the angry reaction? Perhaps there is a hint of guilt in it. I'm get the impression this was a small store - probably owned by one person. So you're running a store, you buy some hats from a foreigner believing the foreigner would have no reason to sell you something offensive. You put the hats on sale and find that whenever a foreigner comes by they make a big deal out of it. Someone explains why and you realize you made a mistake. You feel bad about it but you've already paid for the hats, you don't have a huge profit margin, and you're not the wealthy enough to swallow the loss without significant discomfort.

So when some foreigner comes by taking pictures and asking questions, he reminds you of your mistake - he shames you. You react - not logically, but emotionally.

If she has more of the hats in inventory it would be even easier to understand why she can't just throw them away.

In short, perhaps she's stuck and you cornered her so she lashed out.

"If she has more of the hats in inventory it would be even easier to understand why she can't just throw them away.

In short, perhaps she's stuck and you cornered her so she lashed out."

That is my read on it as well Readin. I think this is what's going on.

Like I said, I was thinking about buying all of her hats. But that simply encourages it to continue.

"I'm get the impression this was a small store - probably owned by one person."

It was a stand in a weekend flea market.

Have to be honest: I smiled as soon as I saw the picture because of the insanely bad-taste nature of what they were saying and the extreme offence they would cause in most parts of the world. Don't get me wrong: they're reprehensible and of course no-one should buy them.

This report came out of Tainan instead of Tamsui from the British Consul, R.W. Hurst, late 1895. Hurst is commenting on the state of Taiwan ...