It's Taipei Signs, I Think 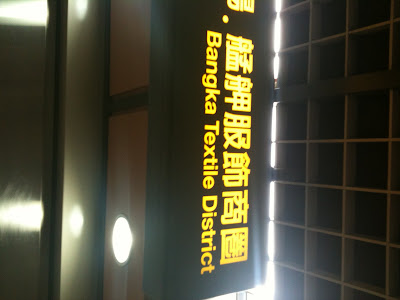 I received this message from an annoyed Twitter pal, responding to one of the signs of Taipei I had posted: "No, I can't handle the heat. Now leave me alone. Stupid adverts. Let me get to work!" I didn't realize I was causing so much grief with my iPhone Tweet-photos, nor do I intend to leave off with them. The signs of Taiwan bring joy, confusion and thought to many. Filled with the spirit of this knowledge, I grabbed the above sign coming out of the Longshan (龍山) Temple MRT today. It is language chaos at its finest. The character 艋舺 is the Taiwanese name for the neighborhood I live in -- 萬華 (Wanhua). The Romanization Bangka means canoe in one of Taiwan's aboriginal languages.
***** 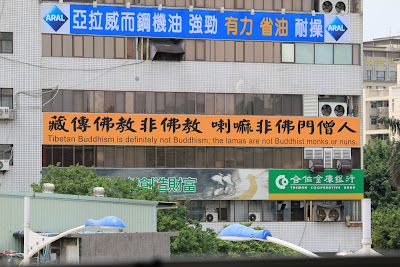 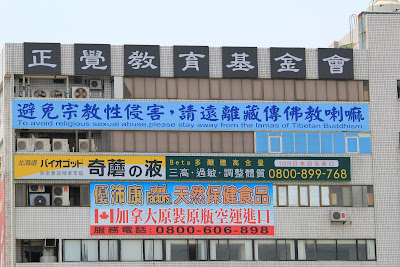 I showed the two shots directly above to a friend (I took them on the Yuan-shan MRT platform a while back) and he said I should follow up. You see, Taiwan is normally tolerant when it comes to religion. I didn't really know how to follow up though. If I were to go over and ask the security guard, my questions would surely vex him. Or, he would avoid getting in trouble and not tell me anything.
I am no expert on Taiwan's various religions. The main religion here is, from what I can make out, a combination of Taoism and Buddhism. Instead of being resistant, this religion seems to incorporate a range of possibilities. I've also heard that Taiwanese Catholics have special permission from the Vatican to worship their ancestors. The Catholic clergy has adjusted and gone from there.
*****
Let me reiterate: Taiwanese people in general are tolerant. I'm married to a local and her Taiwanese family has definitely taken me in. They are the nicest people I know. I am now going to segue into a facet that probably doesn't reflect the population as a whole. Still, this blog does exist for the blog author, so I think I'll touch upon an incident that disturbs me. I'm going to write it down before I forget. Someday, I'll look back at this head-shaker to know where I was at this moment.
A couple of weeks ago, someone I know posted a picture of herself with an African-American friend of mine. The first comment was as follows (here is the rough translation): "Funny! The reason you put that picture up is to highlight your own pale skin!" The African-American friend was a.) tagged in the photo b.) able to read the Chinese quite easily. To her credit, she responded:
"I think his skin color is beautiful." It was clearly time to chime in and I directed my point of view at the first speaker:
"That is the most retarded [bad choice of diction, I admit] thing I've heard all week." To my surprise, I was informed I think too much. Huh? Think too much? It's not like I had written a paper on it. The line I wrote took me about 10 seconds.
I was also told the reason I didn't like the comment was I didn't know how to assimilate into Taiwanese culture. Is this actually Taiwanese culture though? I know lots of Taiwanese people who would find this line of labeling disturbing, starting with my wife. They would say: "No, it is not us." Ironically, what had started out as an attack on (aversion to) my friend's skin color had come around to focus on my skin color. The groundwork for the conversation became "I was white;" thus, I had no right to an opinion. Let's just say it came down to rights; more specifically, it was one person telling another they did not have rights.
My wife is adamant: That is them, just a small minority, not Taiwan. I am inclined to believe her. The optimist inside says most people are not like this. It's just a few giving everyone a bruised eye.

Posted by Patrick Cowsill at 17:21

What a thoroughly obnoxious and ignorant twit.

I'm not sure what's worse: the comment or the fact she can't se anything wrong with it.

LOL. Patrick, I can't believe you didn't get that I was being humorous in that tweet; admittedly, I do find adverts annoying, but I didn't find you photograph/the fact you tweeted it annoying I was just taking an extremely satirical tone! I love the fact you used it to launch you post. Haha, whatever gets the creative juices flowing, as I always say.
It's not uncommon - I'm referring to Taiwanese people's attitudes about skin colour. The weird thing is that this reaction seems to come with the cultural baggage. It's not a matter of thinking too much. It's the conformist streak in Taiwanese thinking. Taiwanese think to little about these things. As a matter of fact, it is not that your or are are culturalists or racist in assuming that most Taiwanese think like this, it's that Taiwanse are culturalist about this, and this kind of culturalism makes them racists - unless of course they act outside of the character of their culture and criticise the mainstream in their culture. It really is sad that so few people do. Usually people like you and I have to shut up about such things, otherwise we are seen as people who complain, who talk to much, to act like obnoxious foreigners, etc.

actually, i'd like to think that is them, a big majority. most people in taiwan (and asia for that matter), especially older folks, are very racist. they are blatant and open about it too. it's simply a lack of education, so for the most part they just don't know any better.

Is it always "racist" to point out what makes people different (skin color, hair type, etc.)? Should we scold a kid who asks, "Dad, why is she so black/white/brown/fat/tall/short, etc.?" My hairy chest and arms often becomes a topic of conversation in Taiwan. Kids want to know!

Secondly, it is my experience that people in countries or regions with relatively little experience with racial, ethnic or cultural diversity (like Taiwan) often are not even aware that the way they talk or write might be considered predjudiced. Their education, experience, and even their parents have not taught them how to deal sensitively with diversity.

As an example-- you meet people from Finland (or Taiwan, just as an example) who tell you that there is no racism there. My question would be: Oh? How do you know that?? There is not yet enough diversity there for them to know yet how their society will deal with large-scale integration of diverse cultures. Immigration (in the case of Taiwan) is such a recent phenomena, that issues of employer discrimination, etc. have only very recently begun to be seen as a potential problem there.

Another case could would be countries where there actually DOES exist considerable cultural/ethnic diversity, but this diversity is not reflected in official or popular culture. China, Japan and Taiwan are examples of places like that, where children are taught that they all belong to one great race. Which is another reason why people in some countries have difficultly distinguishing between nationality and race (but that's a different topic).

"Another case could would be countries where there actually DOES exist considerable cultural/ethnic diversity, but this diversity is not reflected in official or popular culture. China, Japan and Taiwan are examples of places like that, where children are taught that they all belong to one great race."

Fine. The stats are now showing, however, that one in five children born in Taiwan are coming from transnational marriages. Is not a change in thinking in order? Actually, it has already come.

@Andre: thanks for your candor; you paint a bleak picture. At the same time, you say it could pass when the older generation passes.

Like Andre, I think these attitudes about skin color are more widespread than most non-Taiwanese would think. I'm also more pessimistic than you about the younger generation. As long as pale white skin remains the standard of ideal beauty, these attitudes will persist. The flip side of idolizing white skin is to look down on its opposite.

Patrick, i'm the afraid that not might exactly be the case. we probably won't see significant changes for at least a few generations. there's still a huge lack of education. yes, things are improving and there is more awareness amongst the current and younger generation but the ignorance still runs high and widespread. just like with littering, there is more awareness but you still see tons of people just throw their garbage onto the streets in bright daylight in front of everyone. i see it all the time, people driving and throwing crap out the window like it's no big deal. same with recycling. lots of people just throwing their recyclables into regular garbage bins when there are recycling bins available.

Andre, I get what you're saying (and partly agree). I also see people dumping stuff on the ground and not taking ten seconds to properly sort their trash into the correct bin.

Spend a day in China though and things come into a different light -- you can see how far Taiwan has come in terms of how people behave regarding other citizens (or non-citizens).

I think most non-Taiwanese, who think about these things and have been here for any amount of time, know damn well how much racism there is here, particularly regarding people of colour.

I think Patrick's being very generous and I agree with you guys that it's, unfortunately, a majority, though in many cases they are just hair-trigger/ignorant racists rather than full on hate-filled types.

But, again, I certainly don't think that most foreigners are under any illusions that this is an issue.

There are definitely a not negligible body reeling out all kinds of apologist excuses or claiming foreigners just blow it out of proportion but I they're either walking around with their heads in the clouds or being dishonest.

On the contrary, it the locals themselves who are wilfully oblivious to the lumbering, gargantuan elephant in the room, as encapsulated by the horrendously aggravating "you think too much" line.

"There are definitely a not negligible body reeling out all kinds of apologist excuses or claiming foreigners just blow it out of proportion but I they're either walking around with their heads in the clouds or being dishonest."

I was told that I needed to learn how to assimilate when I took issue with the first comment-maker by the individual that put up the post. It was OK for her to mildly disagree and then chide. The moment I upped the ante, she turned on me. This was more than simply someone walking around with her head in the clouds. Her criticism of me was tribalistic. It immediately became a case of us and them, even though I was probably right.

Had I been Taiwanese, she would not have made the assimilate comments. Those comments were irrelevant to the discussion.

To my surprise, I was informed I think too much. Huh? Think too much? It's not like I had written a paper on it. The line I wrote took me about 10 seconds.

Just a quick comment: The "think too much" comment there is just a bad translation from Chinese, often misunderstood. What it actually means is that you "read too much into" or "misconstrued" her comment about skin color.

"Just a quick comment: The "think too much" comment there is just a bad translation from Chinese, often misunderstood. What it actually means is that you "read too much into" or "misconstrued" her comment about skin color."

Yes, I know that. I was being (trying to be) ironic. I understand that her real meaning was to "just let it go." I didn't though, see the blog post. In other words, I get it. I just don't have time for "us and them-ism." Cheers.