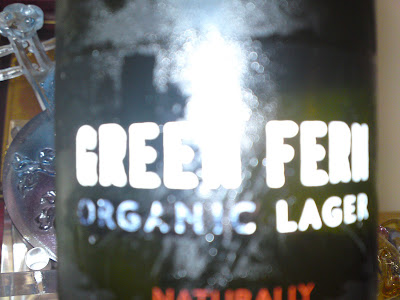 The word "organic" was blotted out with a marker by the store. I scratched it off to see what was under.
I found this Green Fern Beer from New Zealand at Jason's. It's a fairly good, crisp lager. I'm trying to think of a beer that tastes like it.

What interested me is the store had the word "organic" removed from the bottle. Actually, it's still there. Someone had drawn over it with a black marker; I scraped it off before I took the pic. They also crossed it out on the top label. Why would advertising organic beer be a no-no in Taiwan? I don't get this: we have organic food here.

Posted by Patrick Cowsill at 10:11

I love beer. I only drink two kinds; Bud and free, so the “the millionaire next door” says.
Cho-San

Hey Patrick... maybe they thought the word was "orgasmic" instead of "organic" when they looked it up in the English-Chinese dictionary. Some overly conservative shopkeeper was probably trying to keep that kind of "smut" off the shelves. He/she probably thought, "Those damn sex-crazed Kiwis and Ozzies".

sorry for commenting on such a old post. i think they removed the word organic because the beer turned out NOT fulfilling the criteria for being "organic". yes, there is criteria for something to be labelled organic, whether it is how the food is processed or the ingredients, and labelling something organic when it is not so is illegal :)

It's weird. I bought oatmeal at Costco and because it was from the west it said it could lower your cholesterol. The word "cholesterol" was blacked out each time it appeared on the box.