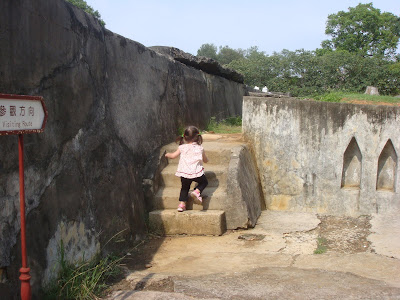 My daughter playing around atop Huwei Fort (滬尾砲台). 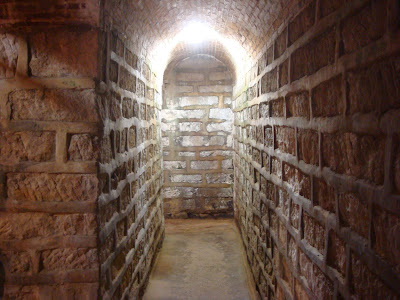 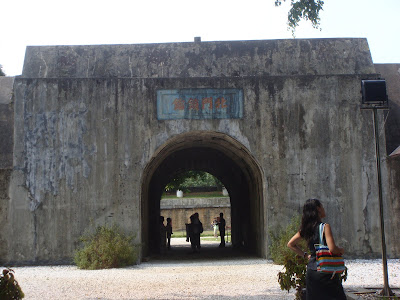 My wife (right) outside the entrance to the Huwei Fort (滬尾砲台) in Danshui, Taiwan. The sign is said to have been inscribed by 1880's Taiwan Governor Liu Ming-chuan ( 劉銘傳). I don't understand it: the first two characters read "North Gate". The other two I'll have to look up some time.

We decided to visit Huwei Fort (滬尾砲台) in Danshui, Taiwan today. It's about 15 minutes down the street from Fort Santo Domingo. Huwei Fort is still obscure as Danshui sites go, I guess owing to the point it's an ongoing excavation project, and because not much is known about it. Excavation began in 1991, just 18 years ago.


According to the brochure and sign literature, it was designed by a German lieutenant Max E. Hecht in 1885, following the French-Chinese battle for northern Taiwan. Construction got underway in 1886 and took three years to complete. The excavators are finding that Huwei is in pretty good shape; the fort never saw action, so it was never pounded down by artillery. Like Fort Santiago, Huwei Fort boasts a magnificent view of the mouth of the Danshui River and Guan Yin Mountain in Bali on the other side. For more information, check out eyedoc's interesting blog and this post among others at 漁人碼頭的戰爭 - THE BATTLE OF FISHERMAN'S WHARF: http://danshuihistory.blogspot.com/2009/06/defense-buil-up-in-danshui-1884.html
Our guide told us Liu Ming-chuan built Huwei Fort, but I doubt this. I doubt he lifted not a single brick in its construction. Some Taiwanese like to get romantic about Liu, as he might have not been as entirely incompetent as others who held his office during the Ching Dynasty, and I suspect this was going on today. In recent years, both the President of Taiwan, Ma Ying-jeou, and once inner-KMT Party rival James Soong (宋楚瑜) have claimed Liu to be their spiritual father: http://rank.blogspot.com/2007/02/rereading-of-liu-ming-chuan-following.html

Ma and Soong often point to Liu's achievements, namely 40 kilometers of railroad track laid and the moving of Taiwan's capital from Tainan in the south of Taiwan to Taipei. There's an obvious irony here. Liu was a Chinese bureaucrat. He came to Taiwan and dutifully served the government in Beijing for less than a decade before returning home.

Next to Fort Wuwei is Taiwan's first golf course, built under the supervision of the Japanese in 1919 (Taiwan was a colony of Japan from 1895, when it was deserted by China to Japan until 1945, when the Japanese surrendered to the United States closing out the Second World War). If you're interested in Taiwan's history, put this stop on your itinerary.
at August 17, 2009

When did you go to Huwei Fort in Danshui? I've no idea whee it is located. But I still would like to give what I knew about "North Gate" for your references. According to ancient Chinese architecture for the castle , there must be designed a river around to protect itself, and several doors for residents passing through. Those doors are generally set in different directions from East to North. Each door can simply be called by the name of its directions. I think North Gate in Huwei Fort must be belonged to this kinds.

You can see the sign more clearly in this pic: http://static.panoramio.com/photos/original/1152304.jpg

I found it on Google Images.

After taking a closer look to the picture, I'm sure you've been confused with some Chinese literature. Let me translate a little bit about those Chinese written on the door for you. "Pei Men" no doubt, means North Door, then "Suh" should be the same meaning in English as lock and "Sih"is the key. "Pei Men" definitely points out that the door is situated to the north direction. But "Suh Sih" in Chinese we can't directly translate from its noun form meaning. Right here, the best way to learn this noun form is to treat it as an adjective function. That's the meaning of "very important". Totally, whole meaning of "Pei Men Suh Sih"is to say "This door or the base is the most important to hold on, and can't never be broken into by the enemy".

It should be "Bei Men Suo Yau" - meaning the key and lock to the north (the direction the invaders may come from).

"Meaning the key and lock to the north (the direction the invaders may come from)."

Now that I think of it, the gate is on the south side of Huwei Fort, facing the Danshui River where invaders most likely would have come from.

I'm just guessing here. Annon. might have something by looking at literature. In China, the barbarian threat (Khan, Mongols, etc.) was often coming from the north.

Don't believe Liu Ming Chuan was inspired by the Chinese history. Huwei Fort was built to ward off invaders. And the only expedient way of attacking Danshui was from the north. He was simply making a statement: "Enter at your own peril".

"And the only expedient way of attacking Danshui was from the north."

Why? I don't really get this. Why not just pull up to the south in a gunboat and fire away.

Or, skipping the gunboat idea, why is the north here more expedient than the south or west?

The reason to invade Danshui (or Keelung for that matter) was to eventually sack Manka (Taipei). If the gunboats could fire from the south, it means Manka was already lost. The west was protected by Guanyin Mountain, plus you'd have to run over Hsinchu first before scaling the mountain from the west side to attack Danshui. Since the prize is Manka, why not go for it directly and forget Danshui.

To attack Danshui, it was much simpler to do a ground assault starting from the beaches in the north. The problem for the French was they picked an area thick with tall thorny Nan-tou trees to advance. The result was more or less predictable. These trees and bushes are still there today.

Hey, Patrick. It's Dennis. I know you may be busy so I am really embarrassed to bother you. But I can not contact with my professor who teaches translation, I think she is abroad.

I want to apply for a scholarship sponsored by a translation agency. It is a Chinese to English short essay. Do you have a little time to take a look on it for me?

I will appreciate that.

OK, email me at pcowsill@gmail.com

I just checked with a friend who knows everything about Danshui. He said: "I checked the book. In the mid-19th century (1843 I think) Singapore's guns fired 3000-5000 yards (up to 4.5 km). Gunnery apparently improved considerably in the second half of the century...reaching ~25 miles in the 20th century.

Gunboats evolved into what we now call destroyers. They carried a mix of different armaments depending on the period. There is no doubt in my mind that both Huwei fort and the red fort were in easy range of Gunboats on the Tamshui river - and visa versa."

That was the difference between front- and rear-loaded guns. The Krupps installed at the Huwei site were of the latter type.

Also, those gunboats were only 400+ tons, more like US Coastguard cutters of today, not destroyers.

I Want to Practice English