I get some emails from time-to-time from "foreigners" asking how to book train tickets online to Hualien (花蓮), Taiwan. As far as I know, you can't using a credit card, unless you have a local card, which is incredibly hard to obtain if you're not a Taiwanese national (if you are, though, they're handing them out like candy). This probably means you can't buy a train ticket to Hualien (花蓮) online for yourself if you're a "foreigner." I'll digress some more to say people could buy tickets online to Hualien with "foreign" credit cards up until 2008. Coincidentally, a week or so after the Taiwanese government dumped some US$30 million into promoting tourism in the West in the spring of that year, the policy was changed and credit cards from the West were no longer accepted.
Anyway, back to the point. If you want to order train tickets online to Hualien and are already in Taiwan, these are the steps you can follow:

3. Imput Taipei (or the city you're coming from) as well as the station. Then hit Next Step

5. Click on Hua-lien and then Hualien below, and hit Next Step

8. Choose the train you want. Remember the train number

10. Click on Internet Ticketing (it's in the column on the left-hand side)

11. Click on Order Tickets Using Train No. (it's the first option)

12. Put in your passport no., ARC no. or local ID no., the station of departure and arrival and the Train No. (From no. 8 above)

13. When the successful booking memo comes up, copy the page (I usually cut and paste it in Word)

14. Print it and take it, along with ID, to either the post office or train station 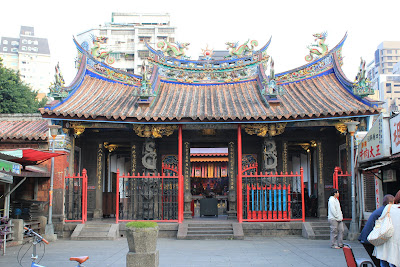 A recent shot of Qingshui Temple 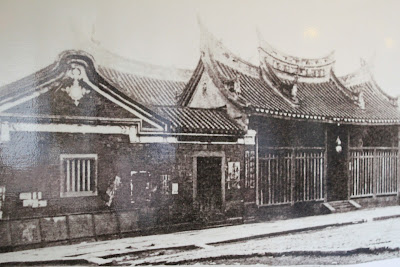 Qingshui Temple as it once looked
I've already blogged about Qingshui Temple (清水祖師廟): http://patrick-cowsill.blogspot.com/2009/09/qingshui-temple-in-wanhua.html, but I returned yesterday for another look. Here's the address:  台北市萬華區康定路81號.  I should start off by saying it's easy to miss if you're walking down Kangding Street. Qingshui isn't on the street, but rather at the end of a lane. The people out eating and drinking at the shops (they set up tables in the lane) can easily distract your view.

According to the blog The Battle for Fisherman's Wharf, Qingshui Temple also briefly housed an important wooden plaque (功資拯濟) from Danshui, which commemorated China's success during the Sino-French War (1885). Interestingly, the people of Monga (Wanhua) refused to return it. This led to ll sorts of new feuding lawsuits, etc. that continued well into the Japanese era. It's possible the plaque is still in Qingshui Temple right now: http://danshuihistory.blogspot.com/2011/01/clear-water-zu-shi-temple-in-danshui.html#comments

Posted by Patrick Cowsill at 21:16 0 comments 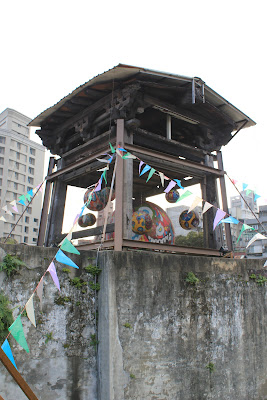 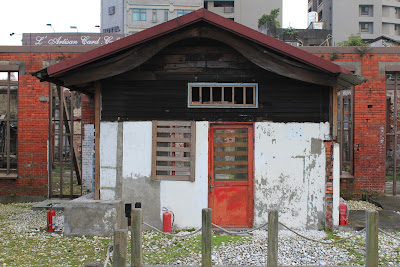 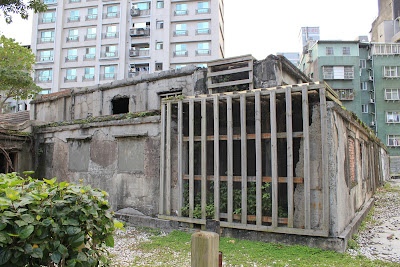 Wanhua Plaza 406
I spent the afternoon wandering around Monga (艋舺), otherwise known as Wanhua. My wife was at her maternal grandma's and was free to do as I pleased. I took all of the shots on this post at Wanhua Plaza 406, which is directly south of Ximending. The park is a work in progress, and seems to be part of bigger effort to restore the district of Monga, seen by many as the ghetto of Taipei. I've blogged about the area before. Resting between Ximending, around ten blocks south of the Taipei Train Station, and the Hsin Tien River, Monga is one of Taipei's most historic areas. During the 18th and 19th centuries, it was known as a vibrant center of commerce and activity. Ships from all over the world called at her ports. Taiwan's important companies normally had a stake here. Centers of culture, such as Longshan and Qingshui (清水巖) Temples, were located near her banks. 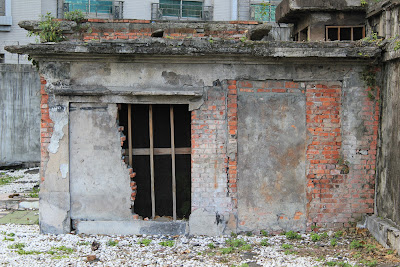 Unfortunately, the Hsin Tien River started to silt up. By the time the Japanese colonists arrived in 1895, big ships could no longer navigate her waters. The Japanese, realizing they would be fighting a losing battle against erosion (Taiwan has the highest mountains in Southeast Asia) and a meandering river, decided to let the Hsin Tien at this juncture go. Now if you read about Monga, it is often suggested that after the multinationals left, brothels and the organized crime that fed off them filled the void. With all the traders, sailors and bureaucrats coming and going, the industry already had a firm foundation and thus officials either encouraged it or turned a blind eye. I'm not so sure that this is how an entire community gets by though. Monga does have a long history of prostitution, but can this sustain the economy for an entire district, or let's say town as Taipei a couple hundred years ago wasn't really a unified city but rather a collection of independent places? One thing is for certain. Monga's glory days are behind us. Household income is 25 percent below the city average. Only one in five people living here has a university degree (as opposed to one in three for the rest of the city). Property values are two thirds what they are in the rest of Taipei. And oh yeah, we have twice the population density and then some.
The optimist in me tells me projects such as Wanhua Plaza 406 are good for the neighborhood. Not only do they remind us of Monga's history, but they also attract visitors or, in other words, people who spend money. I'm not exaggerating. Today, this park had lots of people obviously not from Monga; I had to wait again and again to take my shots as they were posing in front of these excavation works. I grabbed a cab home and we were immediately in a traffic jam, on account of all the people coming to see another popular tourist destination, the 300-year-old Bo Pi Liao (剝皮寮) Street. The driver, a Yong Ho resident, immediately started to complain about what he saw as chaos. When I said: "Look at all these people checking out the neighborhood," he spat:

"Bah. It's even worse where I live. I can't stand it." I still think the focus is healthy and I certainly don't mind the people every now and then. We'll have to see how it goes. 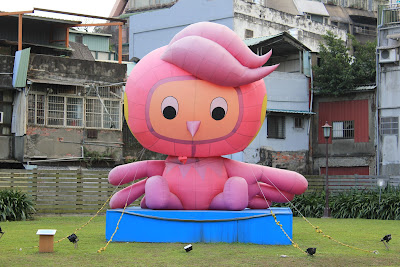 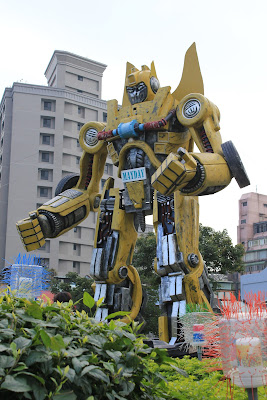 Note: The inflatable pink bird and transformer Mayday were also part of Wanhua Plaza 406. This is a part of Taiwanese culture I don't really get. To me, pop culture is repetitive if not completely boring. Mixing these two monstrosities in with the old buildings (at the top of this post) seems weird. 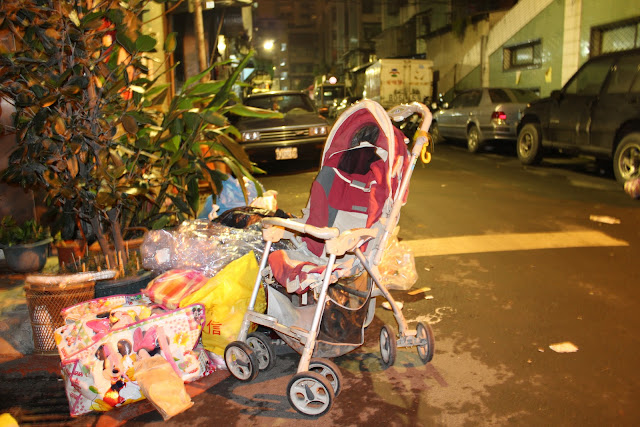 After 3.9 years, hundreds of kilometers, most of Taiwan's major (and many smaller but also important) cities and several countries in Southeast Asia, my daughter Ahleena's stroller was laid to rest tonight. Notice the garbage heap. During the Lunar New Year holiday, such dumping on the streets of Taipei and other places in Taiwan is usually condoned. Traditionally, the Lunar New Year holiday has been seen as a time to clean house in Taiwan. And if you don't get rid of your big stuff, you'll probably be stuck with it for another year.
I have a recap of the circumstances leading up to our abandoning of Ahleena's trusty stroller below: http://patrick-cowsill.blogspot.com/2011/02/tis-season.html. If you'd have asked me just yesterday if I was going to dump it, I would have said "you're crazy."
Note: I folded the stroller up after the shot so it would be easier to toss on the garbage truck.


On a different note completely, I came across this post on An Expatriate in Taiwan. It covers the WWII POW camp that was at Douliu (斗六), Taiwan. I've been to Douliu before, but I didn't think to look into this. I wonder how one goes about confirming whether or not the facade in the picture was a part of the camp. I guess there must be some old pictures out there: http://www.expatintaiwan.net/2010/10/19/world-war-ii-history-goba-elementary-school/#more-565

Posted by Patrick Cowsill at 02:30 1 comments

When you want to see how deep the river is, don't use both feet.
If you are patient in a moment of anger, you will escape a hundred days of sorrow.
Fix the pen only after the sheep are gone.
If you've never done evil, you need not worry about what or who's knocking at your door.
It is easy to dodge a spear that comes from in front of you. Just try to get out of the way of an arrow shot from behind.
Today is Lunar New Year's Eve and I've been looking at Taiwanese sayings. I threw up a few that I agree with or am amused by above. Speaking of the Lunar New Year, which is Asia's version of Christmas, meaning a holiday when families come together, people forget grievances and everyone is full of cheer and goodwill toward his or her fellow man and woman, we had an interesting visit to start the day. This is how it went down.
There was a knocking outside as our doorbell is broken (we've been asking the security company that looks over our building and to which we pay NT$1700 a month to fix such things to fix for the last eight months). Getting the door, I was greeted by an old woman I didn't recognize. Actually, I wasn't greeted. I was simply told to remove my shoe rack from the hallway and to stop leaving our garbage and recycling in the fire exit. The old woman didn't complain about the stroller, however. That was weird. After three and a half years, and hundreds of kilometers, the thing is a battered and filthy eyesore.
When I went back inside, my wife asked what it was about. "Oh, just the security company. It was the usual nagging about keeping the landing outside neat. She says the fine for not complying is NT$40,000 to NT$200,000."
"If they want it neat, they should try mopping the floor and cleaning the windows once in a while, like we pay them to do."
"Yeah. And by the way, they were the ones who told us to put our garbage in the emergency exit." You see, after we complained to the city that we were paying NT$1700 a month in building fees but didn't have garbage removal services, the security company came up with this solution: I would pay an old woman that they knew NT$300 a month. She would come and take our stuff away every day. This was their idea. "Let's go talk to them," I said.
When we arrived at the main lobby, my wife, as usual, explained how we were unhappy with paying so much money and receiving very little service in return. She talked about the broken security system and the eight months' time we'd waited to get it fixed. Then things escalated, so much so that I twice had to tell the security guard not to raise his voice to my wife. He was shouting and my wife was cutting him off repeatedly, saying, "I don't want your excuses!" Then something funny happened. He said:

Or, hopefully, things won't have to be this way. We'll see.

Posted by Patrick Cowsill at 15:56 9 comments