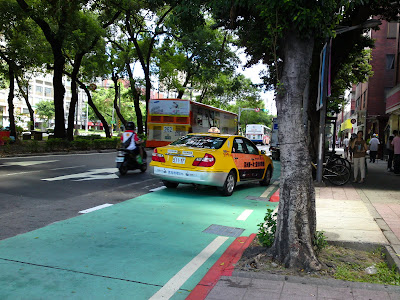 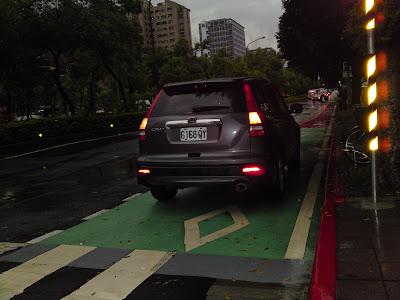 Here are a couple more shots of Taipei's new bike lanes running up and down Dunhua. For more info, there's a great post at "Biking in Taiwan":
http://bikingintaiwan.theforgetful.com/2009/08/kerb_your_enthusiasm.html

The rider at "Biking in Taiwan" thinks they're not working out, that they're not suited for Taipei. I agree with the former point but am hopeful about the latter, and would like to see more. The writer's main issue is with enforcement. It seems Taipei's motorists are already taking liberties. Taxi drivers are turning the strip between Nanking East Road and Bade into a queue. People are parking in them to do errands, like the guy in the above pic. He put on his emergency blinkers. What was the emergency? He needed cash from the ATM. "Biking in Taiwan" writes:
I don't see any of that happening in Taiwan. Ignoring the law is not punished, so the law is ignored.
That being said, enforcement of traffic laws would instantly improve life for everyone, with the possible exception of taxi drivers."
He or she has hit the nail on the head. The police need to get out and enforce these lanes, put up cameras, do something. During the morning rush hour, it's particularly bad. Scooters and motorcycles freely flow down the lanes and block the heads at lights. I've asked several cyclists at red lights how they feel about the lanes. The response is generally positive. But they complain about motorists entering the lanes and blocking them.

Another point "Biking..." makes is that it's like riding on cobblestone - the lanes are not smooth. I don't know what to say about that. They seem to be the same quality as the roads. I just hope this is not a gimmick. The Deaflympics are taking place at the new stadium on the corner of Dunhua and Bade. I want to see more, but am afraid they could return to normal streets once the Deaflympics and "foreigners" are gone.

Posted by Patrick Cowsill at 17:26

I thought "Biking in Taiwan" and the Taipei Times article were a bit premature and poorly informed in their criticism.

I have met with the engineers from Taipei City Government to talk about these plans. I will note a few key points that I hope will give people a better understanding of what the bike lanes are for.

As most people know there has been an extensive network of bike paths constructed along Taipei's rivers in the last ten years. These bike paths are now complete. The next stage is to create a network of bike paths within the city to complement the riverside paths. The Dunhua Road bike path is the first stage of the plan. It is not just something to put on show for the Deaflympics.

Also the engineering works have been done to the highest standard. I am not sure exactly what "Biking in Taiwan" was complaining about when he said the surface was rough. I have only ridden on it once, but I don't remember noticing any problem.

Regarding the buses it is probably the most difficult issue to deal with. I think cyclists just have to accept that buses have right of way and especially respect people getting on and off the buses.

My final point is that there is no problem with the engineering of the bike paths. Whether they prove to be a success really depends on education and law enforcement.

The buses are actually respecting the red the lane and not driving on it. The problem is people getting on and off.

They've looped the bike lanes up on to the sidewalk at the bus zones. They're marked by a broken line but not colored green or red. The riders don't know. The pedestrians often don't notice it to stay off it. This one needs to be worked out better.

So because you heard a presentation by the Taipei City government, you now support the ridiculously poor design of these bike lanes? One presentation about smart people attempting to solve a hard problem doesn't mean they actually solved it. And it's pretty universal--people have excoriated the lanes both in Mandarin and in English. Sure, they have a good ideal they are striving for. And yes, it's not working. No contradiction.

David, I do you drive in Taipei?

People in the north are just so close-minded. I once asked a Taipei-er why Taipei had no-scooter lanes but never thought about having scooter-priority lanes. She laughed and said that was ridiculous.

You know what? Scooter-priority lanes are all over the south. *#&*#$!

@Anonymous, I wish you would put your name to your criticism. I will respond anyway.

I made it quite clear in my final point that the problem is not with the engineering, but the combination of education and law enforcement that is required to make the bike lane work.


Also I added some information based on what I have learnt from the Taipei City government because it gives additional context that is not provided in the Taipei Times article and probably not well known by the general public.

The bike lane has only been open for about a month and the southern section is still not complete. I think everyone should wait a few more months before they can truly say the bike lanes are a success or failure.

For the record I ride both a bicycle and motorcycle in Taipei.

Did my comment arrive before you got home? ^o^

Sorry for a few typos up there in my former comment. :D

While you have a public personality, those that do not sometimes have something to say as well. I don't think there's any shame in posting anonymously; my arguments stand on their own merits. If Patrick thinks I have said something inappropriate, then he can say so or there's always comment moderation. This is a meta-comment, but the fact is, anonymous comments have their value and your blogger friend Michael Turton I think would agree.

Back to the bicycles--enforcement isn't the solution to everything. It's the same reasoning behind why there's a curb on sidewalks. Sure, you could fine everyone who crossed onto the sidewalk part of the road 10,000 NT but you'd just feel a lot safer knowing cars can't physically jump the curb and drive into pedestrian traffic. Or park their car there, even for just a couple of minutes.

Good design says what it's functionality is without you (the user) asking. It's not easy, but traffic safety, especially that of the government officially sanctioning riding bikes on the most busy roadways in Taipei, needs to be done well or the bike lanes shouldn't be done at all.

"If Patrick thinks I have said something inappropriate, then he can say so or there's always comment moderation." Actually, I can delete comments with the edit function once I log in. I don't censor, so I don't bother to put the comments moderation on. I think this is an interesting comment for a) providing a different point of view on the bike lanes b) providing insight on anonymous comments.