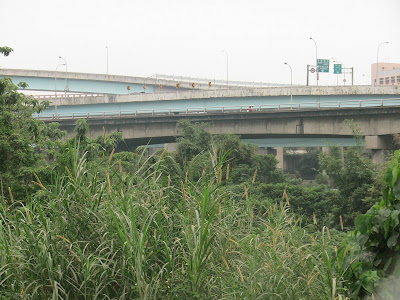 Looking out from Treasure Hill over the Danshui River into Yunghe. 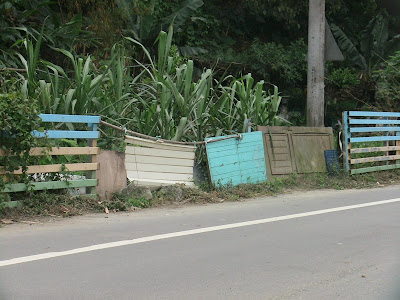 Posted by Patrick Cowsill at 23:02 0 comments 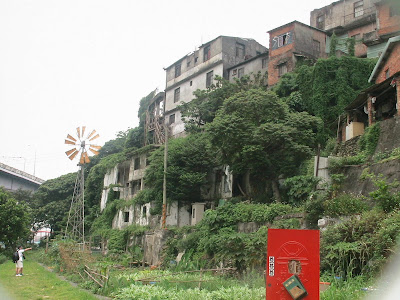 I ride past Treasure Hill on my bike my bike sometimes. It's in Southeastern Taipei, near the Danshui River that divides Taipei and Yonghe.

When Chiang Kai-shek fled China in 1949, he brought with him two million refugees, many of whom were soldiers. Needless to say, housing was an issue. Some of the more resourceful engineered home invasions around the island. Their descendants still live in these homes. Chiang's pay policy for soldiers was based on a 30/70 principle. 30% came in hard cash. For the other 70%, KMT soldiers were expected to forage (rob the locals). Others took over schools and hospitals, where they burnt banisters, desks and books for heat. Most however squatted wherever they could.

Treasure Hill has been around for 60 years. At one time, it was a machine gun embankment to "protect" Southeastern Taipei from surprise attacks by the Communists. The soldiers who manned the guns settled in behind. Today, the guns are gone, but a hundred or so old KMT soldiers and kin are still living in the colony. Every now and then, there is talk of reviving the spot. For example, Ma Ing-jiou, Taipei's last mayor, talked of turning it into an Artists' Market in 2004. The press came (including the NY Times), the place was splashed with a new coat of paint and lit up with lights. Speeches were given. Politicians smiled and shook the vets hands for photo-ops.

Today, most of the Ma hoopla has fizzled out. The old soldiers come and go. Sometimes they pop their heads out of the windows for a look. Life has returned to normal.

Posted by Patrick Cowsill at 22:26 2 comments

My friend Eric sent this article to me, covering a new club that has sprung up at National Chengchi University (my university):

A group of students from Taiwan has caused uproar by founding an avowedly Nazi organisation and boasting that it is inspired by Adolf Hitler. The National Socialism Association was set up by Lahn Chao, a master's student from the National Chengchi University in the capital, Taipei, and 19 others. Its website is a call to arms to rejuvenate the island's politics, end democracy and retake mainland China for the nationalist cause, and bears a symbol in black, red and white loosely based on the swastika flag. It makes few concrete political promises, though website forums contain a large number of links to apparently pornographic websites and online games.

The admiration for Nazism and Hitler the group professes is unlikely to be based on antisemitism, as there has been historically very little Jewish presence in Taiwan.

Mr Chao, who is studying political science, said he was not hostile to Jews but was interested in fostering nationalism and was in favour of limits on the numbers of foreign workers coming to Taiwan.

"I think we have to work hard to restore traditional Chinese values like Confucianism," he said.

Is this Lahn Chao guy on dope? Taiwan has always played host to "numbers of foreign workers." It would be nowhere without them. The original foreign workers coming to Taiwan, the Chinese in the 17th Century (who were transported here on Dutch ships), worked hard to make this country prosperous.

By the way, Confucius wrote of accepting outsiders, that they could and should be absorbed into Chinese culture. The way Confucius saw it, Han society was the perfect form of social organization because it emphasized principles such as filial piety and harmony. It was up to those who "respected traditional Chinese values" to spread the word. It was natural that barbarians, upon hearing about Han society, would be so impressed that they too would become Han.

Posted by Patrick Cowsill at 15:02 0 comments 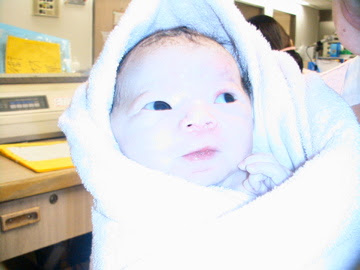 According to my dad: "It's a strange feeling when a child is born. You've never seen this person before, but you're going to know it for the rest of your life--and watch it develop from pure potential into a fully elaborated human being. Get ready for a ride."

Ahleena was born April 12th at 3:45am. And she has elaborated herself from the get-go: "Where's mom? I want to feed. Not later, but right now. Do you hear?" This pic is of her at one hour old - fresh out of the oven. I went to work a day and a half later. When I got back to the hospital, my wife was resting on the bed, exhausted but looking like a goddess. She had just got finished 13 straight hours of feeding! She said:

"Every time I try to put her back in her box, she starts to cry."

Shufang gave birth after 15 hours of labor. At 12:00am, the nurse told me that it would be at least 12 hours more. I wandered out into the lounge, looking for a place to crash. A middle-aged guy was sprawled out on the sofa, with the TV cranked and his bare feet up on the armrest, so I returned to the labor room. A couple of hours later, the nurse said things were speeding up. Maybe it would be another five hours, depending on my wife's strength. I returned to the lounge. The TV was off, but the same guy with the bare feet was letting off chainsaw snores, so I resettled in the labor room. The next thing I knew, the nurse was dressing me in hospital civvies: hat, mask, smock and flip flops. "Where's Dr. Lee?" I asked.

"Where's my wife?" They took me into the delivery room and she was already pushing Ahleena out into this world.

My dad's got it right: What a ride.

The Herald-Tribune reported that Beijing to do something about Sudan, a country it provides weapons and cash to in exchange for oil, to stop the genocide in Darfur. According to reports, this has a lot to do with Mia Farrow, and her calls for a boycott of the 2008 Olympics. In an op-ed letter to the Wall Street Journal, Farrow warned Steven Spielburg, the artistic coordinator for the 2008 Beijing Olympics, that he could "go down in history as the Leni Riefenstahl of the Beijing Games":

http://www.iht.com/articles/2007/04/13/america/web-0413diplo.php
*
According to Beijing, Farrow is only interested in this issue because she wants to make a name for herself. This seems a bit on the dubious side, though, especially considering that first, Farrow has been making great films for 40 years (see "Rosemary's Baby", "Hannah and Her Sisters", etc. if you don't believe me), and second, she's more or less retired as an actress.
It's like my friend Eric was saying: in the future, the world should give China more of what they want (the Olympics, for example) because it puts them in a position where they must protect their "face". In this position, they seem to be a more responsible and cooperative world-player.

Posted by Patrick Cowsill at 14:04 9 comments

My Friend Mandy Went to Kaohsiung 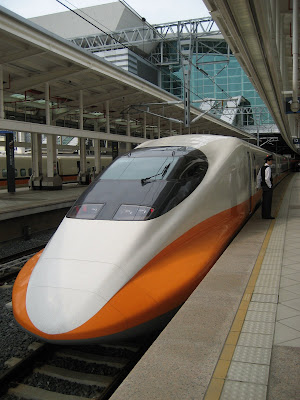 My colleague gave me these pics. She took the High Speed Rail (HSR) with her mom down to Kaohsiung for the tomb sweeping holiday. This is a pic of Kaohsiung Station which, according to Mandy, is a lot larger than Taipei's station. The HSR took only 90 minutes to get from Taipei to Kaohsiung, stopping only in Taichung (Central Taiwan). Tickets, even during the holiday, are available right up to the last minute. 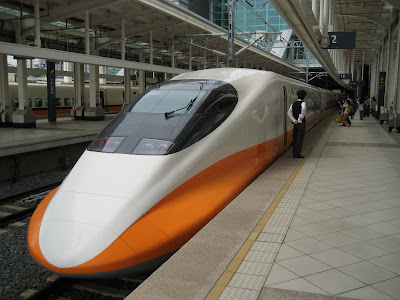 "Life is like a bicycle. You have to keep going to keep your balance." - Albert Einstein 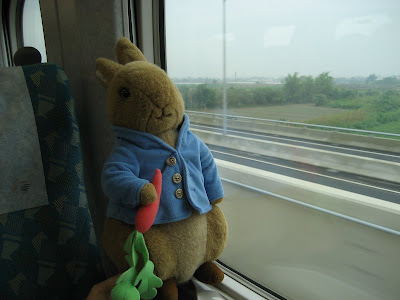 Mandy's Peter Rabbit also went to Kaohsiung. He has "real buttons" on his cardigan. There is a velcro function, that allows Peter to eat the carrot.

Posted by Patrick Cowsill at 13:17 3 comments

Either today or yesterday was the 32nd anniversary of Chiang Kai-shek's passing. It coincides with Tomb Sweeping Day (April 6), a national holiday in Taiwan. On this day, Taiwanese tidy up the graves of their ancestors, burn ghost money, ghost cars, ghost credit cards, pictures of sexy young women, etc. These items can be used on the other side.

I was watching the local news. There was a report on some yahoos gathering down at Chiang Kai-shek, er..., I mean Taiwan Democracy, Memorial Hall to commemorate his passing. Unlike most people in Taiwan, these guys are actually sad to see Chiang gone. The usual gang was on hand, Ma Ing-jieu, James Soong, Lien Chan, basically anyone whose dad got a plum position once Chiang had had the Taiwanese individual holding the post dumped in a river or buried in the bush. They were making political speeches, like it would endear them to the local population. Talk about dumb.

Then a reporter interviewed a spectator. The spectator started by asking "Where's Wang Jyng Ping?!" It was an interesting point. After all, Wang is the only native Taiwanese in serious contention for the upcoming KMT leadership primary. I missed most of what the man said after that because my wife got pissed and started talking, especially when the spectator shouted: "Wang is disrespecting Chiang, the Republic of China's [Taiwan's] hero!"

Where is Wang? I often wonder about this guy. Is it possible that he's another Lee Tung-hui in the making? He's gonna kiss ass for as long as necessary and then, once he has the reins, he's gonna do something very unKMTish, like advocate democracy or cooperation with the opposition party when national interests are at stake? Either way, it must be pretty tough having to tag around after someone like Lien Chan.

Posted by Patrick Cowsill at 12:50 2 comments