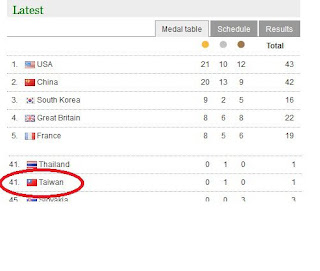 They didn't say Taiwanese Beijing for the no. 2 team either! A good day for two countries of Asia on the political name-game front in London. This comes to us from the UK Guardian online site, home to one of Great Britain's finest papers.

Posted by Patrick Cowsill at 15:32 2 comments 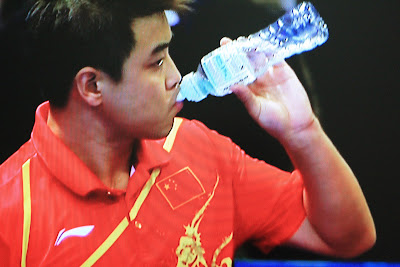 We watched Wang Hao (王皓) of China (above) take out Taiwan's Chuang Chih-yuan (莊智淵) in the Olympic semifinals for men's singles in table tennis tonight. It was the furthest a Taiwanese male has ever advanced in Olympic table tennis competition. He's still up for the bronze medal against Germany's Dimitrij Ovtcharov tomorrow.

The Chinese coach probably burnt more calories than Wang, putting on a Diego Maradona-esque display. He was constantly out of his chair to cheer, which was entertaining. He also clapped for Chuang on good points and was humble in victory.

My wife was a bit put off by the commentary though, especially when Chuang was described as a lightweight fighting a heavyweight. She said it was rude. I saw it more as "you can only find so many things to say about table tennis."

Posted by Patrick Cowsill at 19:35 1 comments 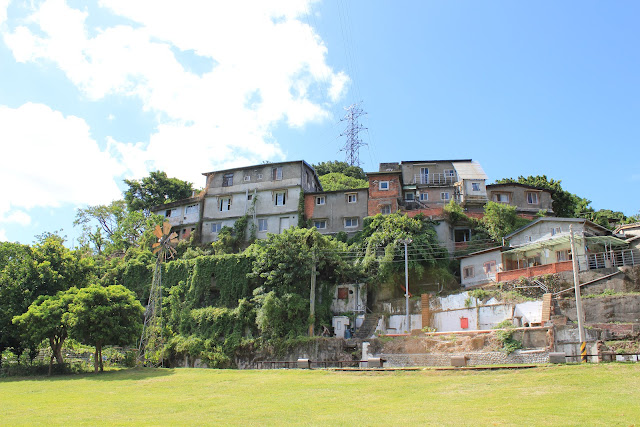 
I ride by Treasure Hill (寶藏嚴) on my bike regularly. It's about a twenty-minute jaunt from my place in Wanhua (萬華). Treasure Hill is a community on the banks to the Hsin Tien (新店) River, near Gongguan (公館). You can't reach it by bus and no roads go past as it's situated inside the flood plain, beyond the city gates. That's why lots of people in Taipei are unaware of its existence. 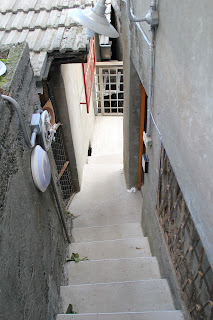 Treasure Hill was created sixty years ago by Chinese refugees, folks who escaped China during the 1940s. Once in Gongguan, they were just supposed to man a machine gun embankment. Since they didn't have anywhere to live, they started to squat on the land behind it, creating Treasure Hill. The squatters allowed some of their buddies from China to move in and soon they had a community. I don't really want to paint that rosy of a picture though. Whenever one encounters a group such as this in Taiwan, one has to ask: "Were any of these people involved in the killing of Taiwanese people during the 2-28 Massacre?" For anyone that doesn't know, the massacre took place in 1947 and facilitated the liquidation of Taiwan's governing and intellectual classes so that the incoming Chinese refugees could obtain a foothold. It was carried out by soldiers who came to Taiwan from China during the 1940s. One is also reminded of Chiang Kai-shek's pay policy in the early years: thirty percent comes from me, seventy percent comes from what you can rummage up or forage from the local population. It stands to reason the original residents, or at least some among them, of Treasure Hill thieved from, bullied and possibly even murdered their hosts here in Taiwan. One could quite similarly extend the discussion to White Terror, as it has been pointed out to me.


Treasure Hill is a collection of small homes, stacked up on top of each other, propped up by and built into the hill behind it. Long after the machine guns had rusted away, Treasure Hill remained. Over the years, it faded from the concept of Taipei to eventually fall off the radar. It was rediscovered in the nineties, with Chen Shui-bien's, then mayor of Taipei, push to evict squatters. I've asked locals about Chen's effort. They will usually side with the squatters, saying something like, "they were poor and had nowhere to go." Even my wife believes this and she has no use for Chiang Kai-shek, the Chinese invasion or the nonsense that has been going on with the Sinification of Taiwan since. I see it a different way. The squatters put up a big fuss and were pretty adamant about not going anywhere. Did they ever say "thank you" to Taipei for being allowed to live rent free for forty years? Taipei wasn't even asking for forty years in back rent, just that they got off the land that didn't belong to them.

To me, the most impressive thing about Treasure Hill is how it looks, especially from the front. The streets are quaint as well. There has been a movement to turn the community into art galleries and places for tourists to go. So now we can stroll around inside and see some pretty mundane art exhibitions packed into small spaces. There are art students and volunteers running about. Around the edges, we see traces of Treasure Hill as it once was: house numbers and a few old people inside windows. There are also signs indicating residents and their real homes (not to be mistaken with the galleries and cafes, so stay out!). When we were were at Treasure Hill last week, the art students and volunteers had a couple of kiddie-based exhibits going, which were lame and very cramped. 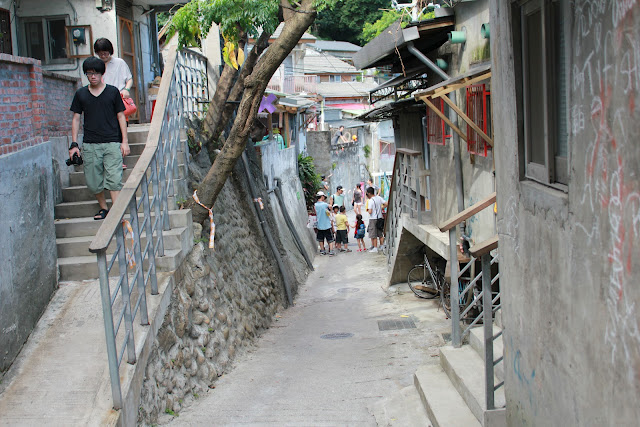 Street and ramp of Treasure Hill 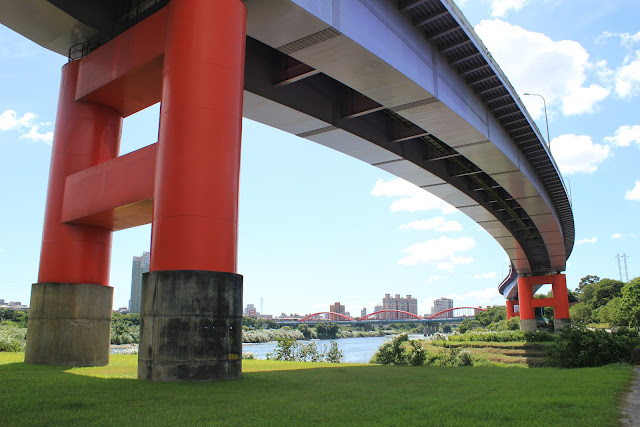 View outside of Treasure Hill, from where I ride my bike. I really enjoy riding through here, especially at night.