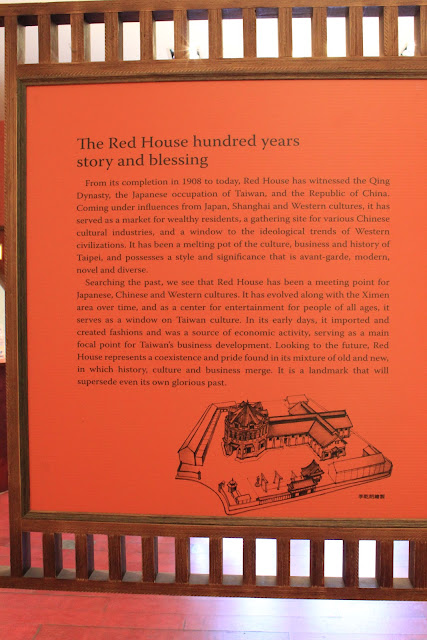 This is how an individual, or group of individuals, obviously employed by the Taipei government, has chosen to sum up the history of Taipei concerning the Red House in Ximending (西門町). Unfortunately, the writer(s) of this account (above) is either politically motivated or foolish. I suppose I'm nonplused as well. I can't figure out if a.) he or she has no concept of historical recollection or b.) he or she is rewriting history following the misguided concept that we here in Taipei need an untrue sense of it. Either way, there's just more muck for us to wade through and sort out.
Have a look at the first sentence in the description: "From its completion in 1908 to today, Red House has witnessed the Qing Dynasty, the Japanese occupation of Taiwan, and the Republic of China." First of all, the Qing Dynasty sold Taiwan up the river in 1895 when they surrendered Taiwan to Japan as part of the Treaty of Shimonoseki. In 1908, they were already 13 years gone. I'll restate this point: the Red House wasn't around in 1895, when the Qing vacated Taiwan. How could the Red House witness the Qing Dynasty if it wasn't built when the Qing left? Even if the Red House had obtained a telescope and pointed it across the strait, it would have been looking at the Qing for a couple of years as the Qing fell in 1911. You think Red House would have remembered such a brief episode? Or how about this one: when the author(s) states the Red House "witnessed the Qing Dynasty," do you think he or she is trying to tell the truth? 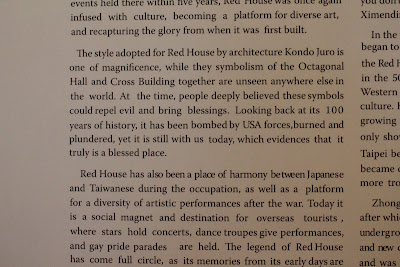 The author(s) later claims the Red House was "a place of harmony between Japanese and Taiwanese during the occupation, as well as" some other stuff. This is a misleading statement. First of all, Taiwan was never "occupied" by the Japanese. (This word comes up again and again though -- what's up with that?) It was "governed" by the Japanese after China ceded Taiwan to Japan in order to get out of the the Sino-Japanese War (1894-5). In fact, Taiwan was not occupied until 1945, when Japan surrendered to the U.S. and KMT troops came to our island. Since the KMT had no treaty or official / legal agreement of any kind to arrive here, this party was undertaking the occupation. As this detail is not touched upon anywhere within the exhibit; I am inclined to believe a bit of disingenuousness and other shenanigans are underway.
There's one more piece of nonsense to clean up here. According to the author(s) of the Red House account, the Red House was "bombed, burned and plundered" by the U.S. during WW II. It is true U.S. planes hit Taipei and Taiwan from October 1944 until the end of the war. In doing so, they managed to take out 75 percent of the country's infrastructure. My wife's great-aunt also died during one of the raids. But American soldiers neither burned nor plundered. As America did not have ground forces in Taiwan, this simply could not happen. With the exception of POWs, American soldiers never set foot in Taipei or anywhere else during the war.
I was only kidding before. I think I can figure out what's going on here. The Taipei government leans toward China, even if most of the population is not on their side. They hope people'll change though and want to do their part. By putting a Chinese stamp all over Taiwan's history, and doing a little rewriting here and there, perhaps this end will be met. 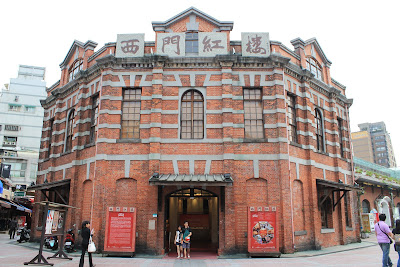 Are the crosswalks of Taipei for pedestrians to cross the street when the light turns green and beckons to them to do so? Or are they purely decorative -- geometric patterns to break up the monotony of our city's abundant cement in its blue-gray?
I took this video tonight at the corner of Dunhua (敦化) and Civic Boulevard (市民大道) in Taipei. I cross the street every night on my way from the office to the MRT, so I'm pretty used to having to duck, dodge or flat-out stop to let cars pass. Here, a driver almost takes out a group of six or seven pedestrians, myself included, to make a right-hand turn. It seems the driver was in a hurry to make the red light going on 50 meters down the boulevard. He was also talking on the phone, but not so engrossed to miss me filming him on my iPhone. How do I know? Well, we made eye contact. Then he jumped up off his seat and almost swallowed his cell.
To change things, I'm starting to believe, it's up to Taipei's citizens to be vigilant. Here's my contribution. By the way, I managed to catch his tag (license plate number). Watch out for G49950 if you're out for a stroll. He's reckless in how he wields his vehicle.


I've decided to start filming this intersection every evening I pass over it. I'll throw the clips up YouTube from now on. 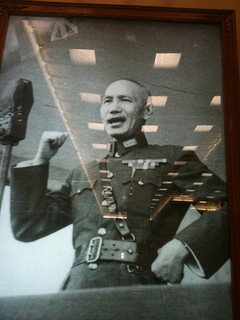 Posted by Patrick Cowsill at 23:21 9 comments