Imagine Taiwan without the Philippines 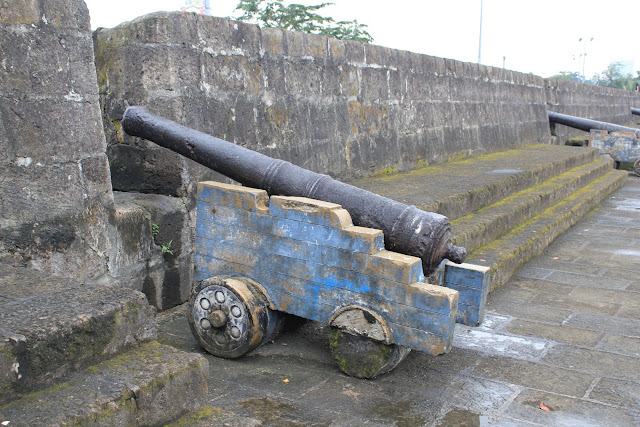 I took this shot in the Philippines a couple of weeks ago. It's a part in the structure surrounding the once Spanish-run settlement of Intramuros, which grew into Manila. Construction on what is seen above began in 1571, after the Spanish came to terms with the locals. This makes the walls and what they contain the second oldest European-based operation in the Far East (after Macau under the Portuguese). Intramuros is one of the reasons the Dutch came to be in Taiwan. As thousands of Chinese settlers arrived in Taiwan on Dutch ships, Intramuros should be included in the story of Taiwan.
The historical account as I've heard it goes as follows. After Holland was able to free herself from the grip of Spain in Europe in the 16th century, she started to assert herself internationally. In the Far East, Spain and Portugal were still the main players from Europe. Holland first established an Asian presence in Indonesia at Batavia (in 1619), which is now Jakarta. The Dutch were for the most part interested in spices, such as cloves and nutmeg. Naturally, they had an eye on the bigger prize, namely Japan. I suppose they also wanted to antagonize the Spanish, who had Intramuros up and running, and the Portuguese in Macau. The plan was to procure goods from China and trade them with Japan. There were two problems with this. First, Chinese law forbade Chinese people from allowing outsiders into China. Second, the Dutch didn't have anything the Chinese wanted. (The Spanish at least had the sense to bring high quality silver from Mexico, something the Chinese did want while the Portuguese were well positioned in Macau.) This did not stop the Dutch.
In 1622, the Dutch landed in the Pescadores, otherwise known as Penghu, and built a fort called Sea-cape. Lying between Intramuros and Amoy, and just 30 kilometers from Macau, the Dutch figured they could press their point. Over the next two years, they pestered the coastal settlements of southern China and shipping in the region so much that a group of annoyed Chinese merchants petitioned their government to allow trade. The mandarins were swayed and the Dutch were told if they moved further away from China, to say Taiwan, their terms could be met. I should point out that I've heard two stories on why the Dutch vacated the Pescadores and moved to Taoyuan (which is underwater in Tainan's harbor today). First, they heard a Chinese armada was gathering to drive them out. Second, the government simply listened to the petitioners, who were powerful and said they would be ruined if they couldn't trade with the Dutch. Dutch ships had also been blockading several ports. It had become next to impossible to trade with the Spanish in Manila, the guys with the fine Mexican silver that everybody wanted.
We need to remember that Dutch were not the first people to come to Taiwan. The country was already populated by 100,000 Aboriginal people of various cultures. In the Tainan region, there were also 1,000 Chinese and Japanese traders. The Dutch radically changed things though. In particular, they laid the groundwork for mass Chinese immigration to this country. They had the transport. They could provide government and protection for the Chinese settlers once they landed. I'm not saying they were benevolent. Taiwan would go on to become the their second most profitable colony, after Batavia. The Dutch were stunningly cruel as well. In establishing their first fort on Taiwan, it is said they kidnapped 1,500 Chinese people. They then roped them together in pairs and worked them so hard that all but 31 died. The survivors were, after the construction was complete, shipped off to Indonesia and sold into slavery. In the following years, the Dutch ruled with a brutal hand, often using Aboriginal headhunters to put down social unrest when their own soldiers could not.
I can't help but think the history of Taiwan would have been different had the Dutch never shown up. When they left, the Chinese population was 150,000-ish. Their influence on Taiwan's agriculture is undeniable. The Dutch introduced breadfruit, parsley, tomatoes, watermelon, mangoes, peppers, lemons, peanuts, custard apples, wax apples, dragon fruit and tobacco to Taiwan. Plus, 17th century rule of law and taxation existed. These policies were so successful that when Koxinga (鄭成功) defeated the Dutch in 1661, he demanded they turn over the books as one of the terms of surrender.
I also believe Intramuros, in the Philippines, had a role in the Dutch, and consequently the Chinese, coming to be in Taiwan. Simply put, had the Spanish set up shop somewhere else, the Dutch would have followed them there. IMG_1744, originally uploaded by Patrick Cowsill.
I came across this restaurant at the Taft Station LRT (Light Rail Transit) Station in Manila. I wanted to take a picture because I was amazed by how offensive it is. In their defense, I'm pretty certain the Filipinos/nas who put it up and who are tolerating it don't get how offensive it is as their history is unique from other countries.
In America, we wouldn't call a Chinese restaurant either "Chinky" or "Bucks." The former is a racial slur. The latter touches on a negative stereotype, namely that Asians are bucktoothed. If you think Bucks is just a coincidence, look at the teeth on the happy face.
When I was taking the picture, the people working at Chinky Bucks got defensive. I assured them that I wasn't trying to steal secrets but rather taking photographs of places that interested me, so I wouldn't forget them.
Note: I googled "chinky." According to Wikipedia, a chinky is what many people in England call Chinese takeout restaurants. I don't know if the connotation is negative or not in that country.

Posted by Patrick Cowsill at 10:36 6 comments