村子口 = Entrance to the Village Restaurant 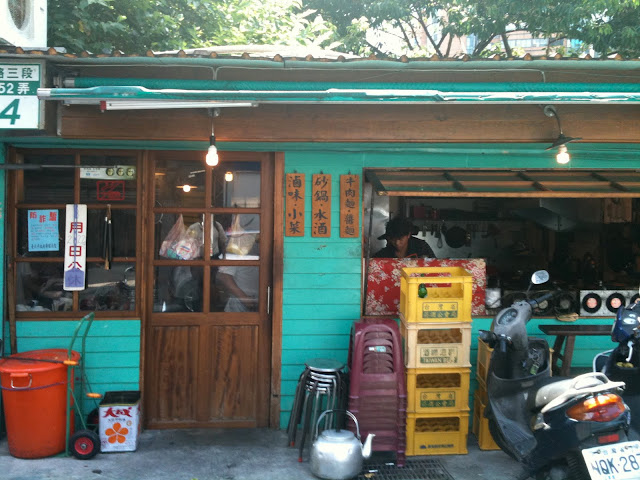 This is actually a restaurant, an extremely popular lu-wei (滷味) restaurant near my office in the Songshan District of Taipei. Inside that door there are eight to ten tables, and they'll all be full any lunch hour of the week. For any of you that haven't had lu-wei (滷味), its tofu and other simple dishes marinated in soy sauce and spices. I met up with my friend today, Markus, for a lunch of dumplings, leeks, spiced seaweed, spicy shredded tofu over tea eggs and spicy dried noodles. Lunch cost NT$280 (US$8).
Markus and I have been meeting up for lunches going way back. We met in nineties at Anya Gym, a basement gym near Shita University. We used to shoot the breeze as we ran the treadmills and that's how we became friends. Since then, we've been taking turns choosing restaurants around Taipei and treating each other. We usually hook up every one to two months. This time, it was Markus' turn to choose / pay, and he did a mighty fine job. He found 村子口, or the Entrance to the Village Restaurant.
The Entrance to the Village Restaurant is second KMT restaurant Markus has taken me to in the Songshan area. When I say KMT, I mean places set up by 1949 refugees from China. 1.5 million Chinese people escaped to Taiwan after Chiang Kai-shek, in all of his incompetence and corruption, lost China to Mao Zedong. If you go inside, you'll immediately know what I'm talking about. There's KMT memorabilia on the walls and slogans as well. I've heard they sometimes play old "patriotic" songs, though notice the scare quotes. Those songs must have been a bitter pill for the local people to swallow, especially after how cruelly they were colonized by the 1949 refugees from China.
One thing I didn't care for at the Entrance to the Village Restaurant was the waitress' attitude when she  greeted us. Instead of asking us what we would like to eat, she simply pointed at a menu and grunted. Now you might think this is just her way, but she didn't seem to have a problem speaking in full and polite sentences with the other customers. The reason I'm bringing this up is I am afraid that we were being singled out because of our skin color. You see, both Markus and myself are white. I think she must have judged that we couldn't speak Chinese, which is not the case. This is how long it took for us to get through to her. We had the following conversation, and it was in Chinese:
Me: Could we have some menus please?
Waitress: (holding menu and pointing) Grunt!
Me: Could we have a pen please?
Waitress: Grunt!
Me: You don't want to talk, right?
Waitress: Huh?
Me: My friend can speak Chinese. I can speak Chinese. You don't need to be so nervous. We don't feel good.
Waitress: Well, er... um... What would you like to eat?
Markus: Spicy noodles. 10 dumplings, and some tea eggs.
(Later)
Me: Could I please have some white vinegar?
Waitress: (chilling a fraction) Okay. Wait a minute.
(Later)
Me: Could we have some soy sauce?
Waitress: (still trying to relax) I'll bring some to your table.
(Seconds later, and yelling at us)
Waitress: HEY! GIVE ME THAT SOY SAUCE BACK! ANOTHER TABLE NEEDS IT!
Markus: Miss, you can have the soy sauce when you ask politely. How does that sound?
Waitress: (finally, a smile) Sir, could I please have the soy sauce?
Me: And I want some glasses.
Waitress: (taking me by the arm - Wow!) Here they are.
I think next time I go to the Entrance to the Village Restaurant, the service is going to be better. The food is already great. There's also a big cheery guy with betel-nut stained teeth at the door, wishing everyone well when they leave. He shouted "thank you" in English at us as we were leaving. Markus is actually German and Spanish. I'm a new Taiwanese, but the intent was right.

Posted by Patrick Cowsill at 23:18 8 comments

The MRT Will Be Joining Us for Dinner Tonight, Dear 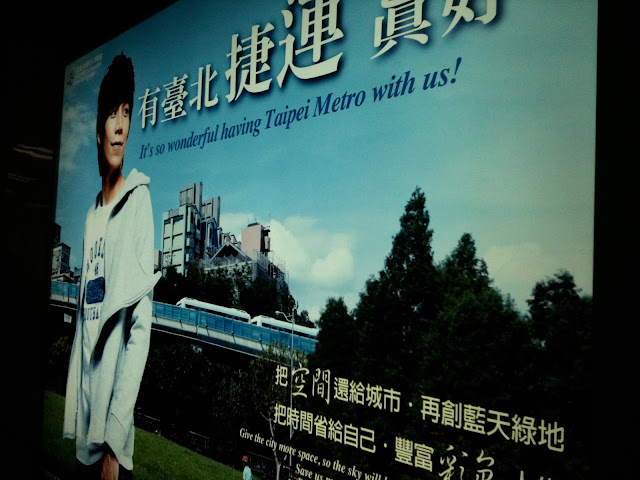 The Taipei MRT used to have a competition. If you could find three grammar mistakes or examples of Chinglish in their signage, they'd pay you NT$1500 (around US$50). I thought it would be easier to figure out who was responsible for the mistakes and then fire that person for incompetence. But who listens to me?
I took the above shot at the Chungshiao-Dunhua (忠孝-敦化) MRT Station yesterday. I think I know what's going on here. Someone with high-level position either signed off on the "It's so wonderful having Taipei Metro with us" slogan or coined it her/himself and the people working under her/him were too afraid or embarrassed to say it was Chinglish. You might be wondering how someone who doesn't speak English could be managing an advertising or PR company or department that makes English signs. Well, in Taiwan, there's a saying: "The dead wood floats to the top." Simply put, you get promoted for staying in a company for a long time, not because you're any good. Loyalty is valued over competence. In all my time in Taiwan, I can't remember seeing a single Taiwanese person fired for incompetence from a Taiwanese-run company. I have seen "foreigners" fired for sucking, but that's another topic. Taiwanese people get fired for the following: a.) Arguing with a superior b.) Making unwanted passes at a colleague c.) Being a good scapegoat when one is needed.
Getting back to the sign. I think what the ad or PR company or department is trying to express with the "it's so wonderful having Taipei Metro with us" is that the MRT has improved the quality of life in Taipei. I agree with that. If you think Taipei's streets are clogged with traffic, you should have seen them in the 1990s. A friend who lives out in Hsin Tien told me it used to take her up to two hours (on a bad day) to get to work. Now, thanks to the MRT, she can get there in 25 minutes. I remember walking to Chinese class when I lived in Yonghe (永和). It took around 45 minutes as I had to cross Zhong Cheng (中正) Bridge. The reason I walked was I knew how long it was going to take me. With the bus, it could be 20 minutes or it could be an hour and 20 minutes. The MRT allows us to time our commute. And it's cheap; riding to work costs me NT$20 (US$0.60).

BTW, there are some interesting stats for ridership at the Taipei Metro Web site. Ridership is up around 50 percent in the past five years: http://english.trtc.com.tw/ct.asp?xItem=1056489&ctNode=11767&mp=122032

Posted by Patrick Cowsill at 10:23 4 comments