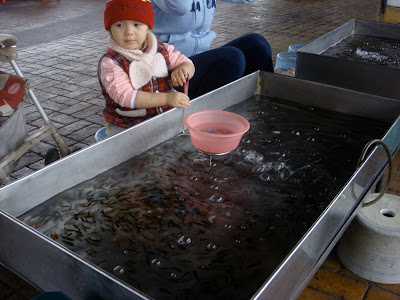 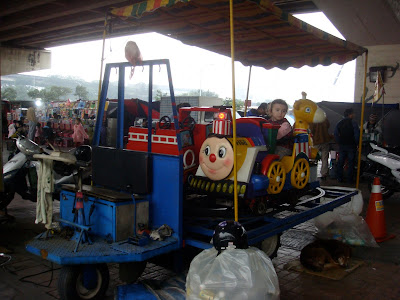 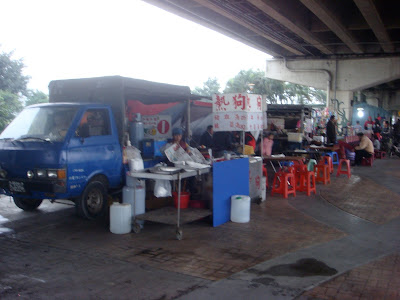 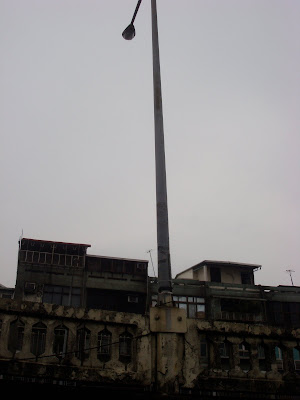 My family visits "Go Go Land" under the Huazhong Bridge (華中橋) in Wanhua (萬華) or Manka (艋舺), if you like, regularly. On weekends, local venders set up a traditional arcade. It includes shrimp and goldfish fishing (see above pic), traditional pinball, which issues tickets for prizes, and a ping pong ball throw. There is also a Thomas the Train ride which my daughter likes. It's hauled in on a three-wheeled motorbike.
According to its plaque, the Huazhong Bridge (華中橋) was completed in 1975, though it looks much older, thanks to wear and tear from the city's pollution and the Danshui River, over which it reaches. Huazhong Bridge is special for several reasons. First, it connects Monga (艋舺) to Zhonghe (中和), once a sprawling countryside of emerald-green rice paddies but now one of the most densely populated suburbs in the world. The bridge is also an interesting example of 1970 / 1980 architecture, viewed as shoddy by many. Flaws in the era's construction were revealed following the 1999 earthquake, a 7.3 with an epicenter in central Taiwan. Buildings, almost exclusively from this period, fell in an instant, exposing the corruption of builders who were in cahoots with officials. Columns were cracked open so that everyone could see they were hollow. Sometimes they were stuffed with newspapers or bottles to extract the echo should someone knock on them, but this was laid bare too. Hundreds of buildings lacked the basic amounts of concrete needed to keep them standing.
The shoddiness of this kind of architecture also speaks to Taiwan's unique history. Until 1945, the country was a colony of the Japanese. During the colonial period, the Japanese put up some magnificent and long-standing buildings, such as the Presidential Building and Biology Museum in 2-28 Park. All around this core, architecture remains as a reminder to Taiwan's impressive progress 115 years ago until the Second World War. After the US allowed the KMT to escape to Taiwan, things changed. The KMT invaders, intent on returning to China, saw little use in pumping money into Taiwan. For 30 years, general infrastructure spending stagnated as Chiang Kai Shek's regime siphoned off funds to the military and developing alliances overseas, in a policy of checkbook diplomacy.
By the 1970s, it became apparent that Chiang and his team were going nowhere. They were losing it internationally and having a hard time maintaining legitimacy at home. Taiwan was booming economically, and the democratic movement was gaining a footing. In 1973, the KMT regime, scrambling to remain relevant, implemented the Ten Major Construction Projects (十大建設):
1. A National Highway
2. A Northern-Link Railroad
3. An International Airport in Taoyuan
4. A Port in Taichung
5. A Port in Su-ao
6. Electrification of the Western Railroad
7. A Steel Factory
8. A Shipyard in Kaohsiung
9. An Oil refinery / industrial Park
10. A Nuclear Power Plant
At the end of the day, the Chiang regime was deemed illegitimate and martial law, which will always be attached to Chiang, came to an end. Locals were allowed to vote. They also began to speak and ultimately reclaim their country. Besides serving as a landmark in Wanhua, the Huazhong Bridge stands as another monument to this troubled and dark era.
The top picture is of my daughter fishing. The vendors who have set up shop under Huazhong Bridge have been carrying on for decades. They don't seem to have licenses, but the cops, who occasionally scooter down the center of the show, don't seem to mind. The owner of the fish tank my daughter frequents told me that she has been working under Huazhong Bridge for 12 years. The second picture (at the top) is of Ahleena's favorite ride Thomas, the Train. The third is just a wider view of "Go Go Land". It captures a stinky tofu stand followed by a bank of traditional pinball games. The fourth is Huazhong Bridge, kooky wiring and all.