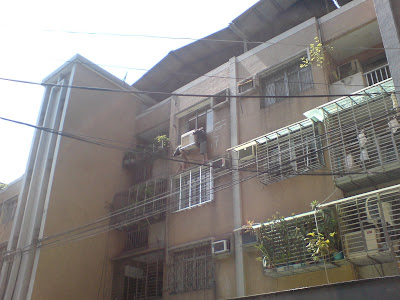 I took this shot on my cell phone last Friday. The workers are removing an air conditioner from a fourth floor apartment in Taipei. Notice that they are not wearing safety harnesses. 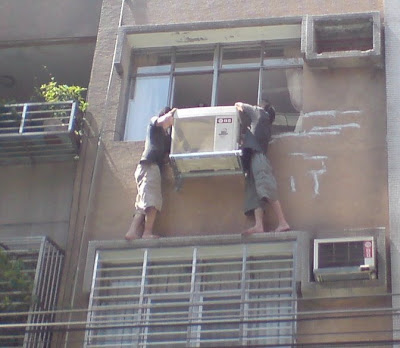 I cropped another shot for a closer look.

I've had a bad week for noticing accidents in Taiwan. Last Thursday, I was even part of one. I was riding a bus from the Wanfang Hospital MRT station to my place in Wenshan when a taxi suddenly cut in front of us and braked to pick up a pedestrian. The bus driver had no choice but slam on the brakes, sending one elderly woman over his shoulder so that her face planted hard in the metallic dashboard. Another passenger fell on the coin drop. The bus driver immediately ordered everyone off the bus, but it was pandemonium, and no one was going anywhere. The first woman's face was split open and gushing blood. The latter's arm was also bleeding pretty badly.

We were surprised to see the taxi driver appear at the bus window, yelling threats and pretending he had no hand in the matter. When he saw all of the blood, I guess he had second thoughts. He high-tailed it back his cab and, with his passenger already inside, tried to make an escape. The light in front was red and he pulled up next to a police car.

After a decade in Taiwan, I still can't believe something isn't being done about the carnage on the roads. Everything else seems to improve. There is now national health. We have new parks popping up all over the place. The MRT is making life for commuters easier. People have protested nuclear power in the tens of thousands. Anyone, no matter how silly, can get a university education. Yet people can't figure out how to drive. This just does not make sense to me. I don't understand how individuals who are so well educated can drive so badly, like they do here in Taiwan.

Once again, it's really been an awful week for me when it comes to seeing accidents. I've seen two scooter crashes first hand, one aftermath of scooter accident (see below pic) and freeway pile up. To top it all off, I heard this story over lunch last Thursday. It took place 15 years ago and starts with my friend's future husband droppng her off at home. They were still in college at the time.

After leaving her place, the fiance was crossing a bridge in a for-scooters-only lane when a speeding car nailed him, sending him for a good tumble. Instead of doing the courteous thing and stopping to help, the driver simply sped off. It was dark, so, as my friend explained, her fiance who was out cold could have been there all night, laying in the middle of the road. It was dark out, so the driver figured nobody had seen him. But he wasn't so lucky either. After making a note of the license plate, another driver took my friend's fiance to the hospital.

Later, when the cops dragged the driver who had caused the accident in, he claimed: "I was scared. That's why I didn't stop. Besides, I thought you were dead."

After relating the story, my friend asked me: "Can you imagine that? If that guy hadn't stopped, I wouldn't have had a father for my two sons. Yet that nice man refused to even see my husband, let alone hear his thanks." She didn't say: "Can you imagine that - there are people out there that are this immoral!" She never said: "I wanted to kick his ass!"

"What about the driver?" I replied, "I hope you guys put him away for a long time." [In Taiwan, hit and run, even when it leads to death, is a civil and not criminal case.]

"No, but he looked pretty sorry when the police brought him in. Plus he paid NT$20,000 in compensation. That was enough to buy a new scooter back in those days." When I asked her if she/they didn't feel they were also responsible - responsible because they hadn't removed a maniac like this from the streets when they could have, I received this: "It's not like that in Taiwan. You don't understand it yet. Besides, he would've only gone to jail for a year."

I don't even know what to say to something like that. I believe that people who hit and run should receive stiff sentences. Once more, I don't think that these cases should be in the hands of the victims. But I do know I should keep as far away from the streets and driving as is possible here in Taiwan. 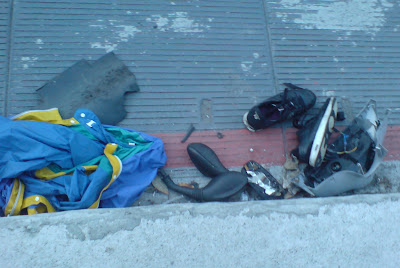 I'm lucky I didn't see this accident, at the corner of Fuhsing and Nanking, across from the MRT entrance. When I got there, they had put pylons around the scooter, debris and personal effects. I took this shot two days later. These items, a raincoat, shoes, etc., were then brushed up to the curb. The crunched motorcycle was also there. It was sandwiched between two waiting taxis.

Posted by Patrick Cowsill at 02:17 6 comments